Elise is one of Australia’s leading Voice Over artists.  She is a three-time Goldie Award winner for her Voice Over work and is also a three-time Matilda Award-winning actor.  This makes her super versatile and very easy to work with. Elise is an acting graduate from USQ and an Honours and Masters graduate from QUT majoring in the area of Voice.  She also trained with Shakespeare & Company in Boston USA.

The “go-to” female voice, Elise’s accent is neutral, which means she is in demand around the globe, working with clients in Singapore, Dubai, New Zealand, South America and Spain. She has extensive experience doing reads for television, cinema, radio, internet, audio books, corporate narration and children’s reads.

Elise can be contacted directly: 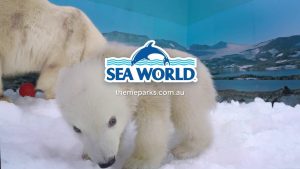 A singing pelican? Why not? Over the years, versatile Brisbane voice actor, Elise Greig has been asked to lend her considerable vocal talent to all types of characters. It’s all in a day’s work. 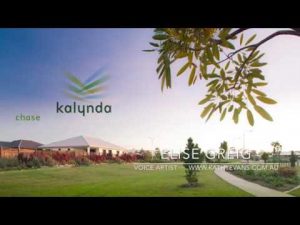 Kalynda Chase is a new property development in Townsville. It’s where people connect with a quality life… and listeners will hear the warm reassuring timbre of Elise Grieg’s reads for a series of local television commercials. 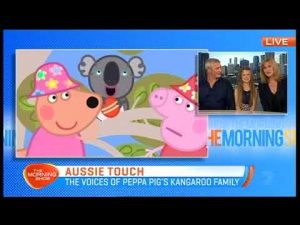 Professional voice actors, Tony Bryne, Elise Grieg and their talented daughter, Finley were recently asked to add their vocal talents to four Aussie episodes of the internationally acclaimed childrens’ cartoon, Peppa Pig. The trio were cast to play the Kangaroo Family, leading Peppa Pig on a trail of adventures to the beach, outback and the Great Barrier Reef.